THE DIE IS CAST 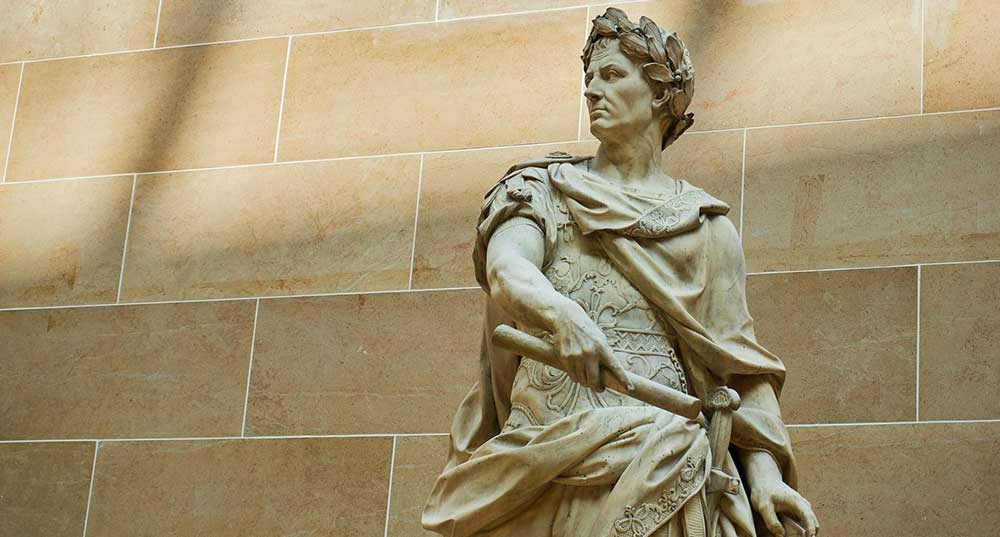 Julius Caesar was the greatest of all Roman leaders and for that matter of all leaders.

He ultimately came to define what it means to be great to western civilization.   It is said that Julius Caesar “is the only supreme yardstick of greatness.”  Caesar had many cardinal qualities but one that is inherent in all great people, leaders, and warriors is his self-reliance.

The foundation of Caesar’s self-reliance was built at an early stage.   His education/development was not just centered on the intellectual but also utilized combat oriented games to develop both fitness and character.  These games, where at times gladiators were instructors, were not for the feint hearted; they were intense; rough; and demanding.  In the end, it was not about the game but about building character and it is in these games that Caesar learned to rely upon himself and his abilities.

Caesar’s self-reliance showed itself in his adolescent life.  He was kidnapped by pirates demanding a twenty talent ransom during a trip to Rhodes in Greece (a considerable distance from Rome).  It is said the Caesar confidently advised the pirates that they were not asking enough.  Moving with his own resolve, he empowered his slaves to go into the towns and provinces to raise the money.  After paying the pirates fifty talents, the amount he thought he was worth, he hired several ships and promptly returned and crucified the pirates but also got the 50 talents back.

Julius Caesar went on to concur Gaul (modern day Spain & Southern France) and subdue the Germanic tribes.  These conquest were great achievements but Caesar knew he had not yet risen to his highest pinnacle and that his greatest achievements, however, were ahead of him.

Rome itself became his next great battle ground as it had devolved into a corrupt entity and was at a political and economic standstill.  Caesar seized the opportunity and mobilized his legions and political connections and embarked upon Rome.  As he stood on the edge of the Rubicon River in northern Italy ready to initiate his conquest of Rome, Caesar said “The die must be cast!”  Thus he initiated the conquest of Rome with the conviction of belief in himself and his ability to overcome the obstacles that lie before him.  Ultimately Caesar turned Rome upside down and became the ruler of Rome and every ruler of Rome thereafter was called Caesar.