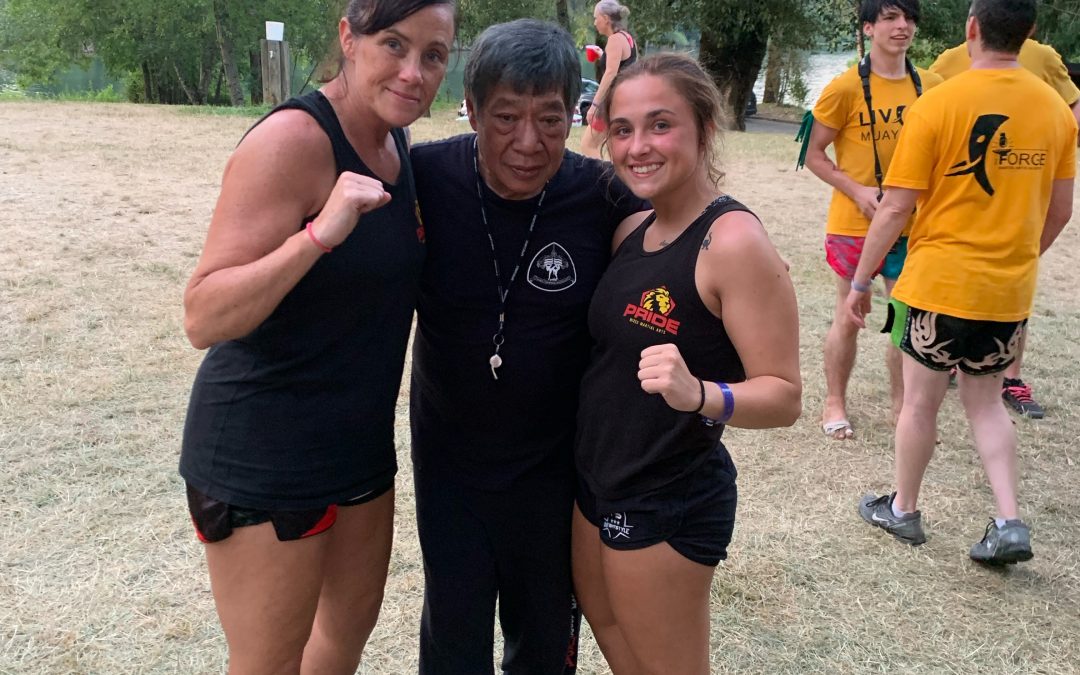 This past week was a BIG week for Pride Mixed Martial Arts!

This year marked the 30th anniversary of the WTBA Oregon Camp and Pride was honored to be a part of it.

The World Thai Boxing Association (WTBA) is the oldest and largest Muay Thai organization in the World.  Founded in 1968 by Ajarn Surachai “Chai” Sirisute.  Ajarn Chai came to the United States with a vision to spread Muay Thai to throughout the world, and he is the first-ever Thai boxing instructor to teach Americans this art and he has worked tirelessly for 50 plus years to that end.

Throughout his 50+ years, Ajarn Chai has taught Thai Boxing techniques to over 20,000 students. His early years included teaching in backyards, YMCAs, colleges and universities. Specializing in training full contact fights for International competition in W.K.A., P.K.C., I.K.B.A., K.I.C.K. and Muay Thai, he also headed the first U.S. team to Thailand to compete in the International Championships (1982 Bangkok, Thailand). From 1983 to 1990, Ajarn Chai was a conditioning trainer for the Dallas Cowboys, and has trained many amateur and professional Thai boxers.

The WTBA has now expanded to establish affiliate organizations in countries around the world. Ajarn Chai continues to promote Muay Thai through his select personal seminar schedule, hand picked seminar team and yearly Instructor Development camps in the USA, UK and Australia.

Coach Epps got introduced to Muay Thai and the WTBA through John Sosa in 1993.  Coach Epps was invited to compete in one of Sosa’s back yard smokers in South Oak Cliff Texas.  After experiencing the devastating power of Muay Thai he knew he was hooked!  Shortly after moving to Oklahoma, Coach Epps, started training with Ajarn Mike Parker.

This camp was special for another reason-

Keelie (Coach Kiwi) has been training with Coach Epps since she was three years old.  She has spent her life in the gym.  Her brother started classes first, she would practice on the moves the class was doing on the sidelines- until one day, Coach Epps asked her to join the class…the rest is history!

A fierce competitor and phenomenal coach, Keelie always impresses with her skill, talent, and perseverance.  More importantly, she sets a great example for what it means to be a martial artist.  We are so proud of her promotion to Kru.

Pride Mixed Martial Arts is honored to be a part of the WTBA and to help with Ajarn Chai’s mission to spread the art and sport of Muay Thai in America!